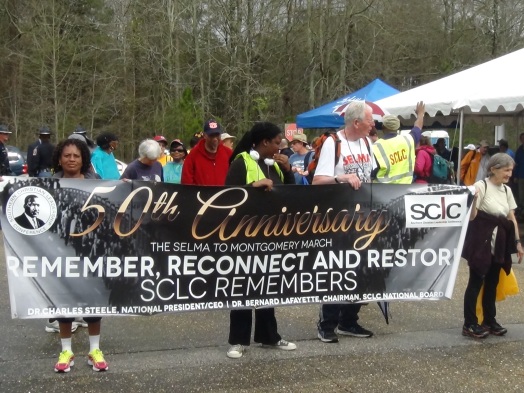 Every year the weekend of March 7th or so is the annual celebration of Bloody Sunday. This Saturday March 7th saw President Obama, Michelle Obama, their family along with Mrs. and President Bush, and Congressman John Lewis attending the 50 year anniversary on the very bridge where Representative Lewis almost lost his young life after having his skull cracked by a policeman wielding a Billy club.

This year being the 50th anniversary, Marci and I decided to walk the 54 miles in the footsteps of our ancestors who braved Billy clubs, tear gas, dogs and a racist governor who empowered a racist sheriff to do anything he could think of to stop those unarmed, non-violent people from walking to the capital of Alabama for their rights.
The reenactment is sponsored Southern Christian Leadership Conference (SCLC) just as it was 50 years ago.

So every day for five days Marci and I are getting out of our beds and walking about ten miles. It has been harder on me than her (she walks everyday and does various forms of exercise. I don’t but plan to start).

Everyone has heard of Dr. Martin Luther King and how he worked along with his friends and lieutenants Ralph Abernathy and Andrew young to coordinate the court case which granted permission for the Voting Rights March which ended on the Capital steps on March 25th 1965. But this walk is not in celebration of the already celebrated. For Marci and I this walk is in honor of those people whose names are not holidays and bridges but without whom we would not have the lives we enjoy today. We plan to interview the foot soldiers of that time and those who like us are walking the first time.

The next few days will be tough. I will keep you posted.