Kathy and I played around with a lot of names before we decided on the acronym BOLT: Black Old Lesbians Traveling.  We wanted something that spoke to the intersections of who we are and what we are about.  Growing up in the 60s and 70s we experienced excitement, pride and much love for the Black power and pride movements.  So the ‘B’ was easy.  We are comfortable, out lesbians and traveling was and is our mission hence the ‘L’ and the ‘T’ were simple choices.

What about the ‘O’ though?  We chose the ‘O’ intentionally, deciding to embrace and celebrate this time of our lives.  For many people old continues to be a derogatory word.  We continue to be told “but you’re not old” as if it’s some horrible slur.  I’m old enough to remember when calling someone black was such a slur.  Things change. I can’t imagine someone telling me “but you’re not black” when I proudly state I’m a black woman.

The OLOC (Old Lesbians Organizing for Change) statement on “why old” says it better than I can.  “Society calls us Old behind our backs while calling us “Older” to our faces. “Old” has become a term of insult and shame. To be “Old” means to be ignored and scorned, to be made invisible and expendable.

We refute the lie that it is shameful to be an “Old” woman. We name ourselves “Old Lesbians” because we will no longer accommodate ourselves to language that implies in any way that “Old” means inferior.

We call ourselves OLD with pride. In doing so, we challenge the stereotypes directly. Thus, we empower and change ourselves, each other, and the world.”

So BOLT chooses to fully embrace the word old and to challenge the stereotypes and misconceptions around it.  We also know there’s a lot of privilege, joy and a ton of humor in being old.  Next blog will be about the specifics of traveling while old. 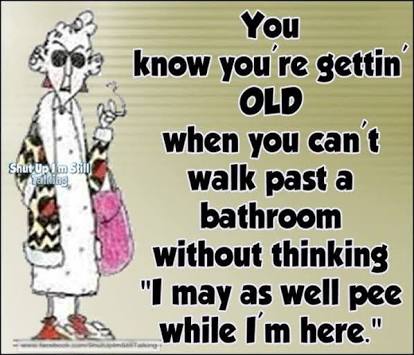